The U.S. Navy and Chainsaw Chicken have reached a licensing agreement to use Chainsaw’s likeness in their new emblem and logo called ‘Chaingun Chicken’ for the Navy’s new fast attack boats that also qualify for the Green New Deal specifications.

The Navy came to Chainsaw because of his popular image involves strength and ability as well as versatility.  At the same time they want to leverage the fear that a strong hearted like animal standing up to authority.

These new 85-foot boats run silently with the innovation of their new all electric platform.

These reach the pinnacle of lethality with electric rail guns firing 35-pound depleted uranium projectiles at a rate of 20 per minute.

The final issue is getting a long enough extension cord since the New Green Deal will not allow the craft to have an ability to have any type of generator onboard to create enough power to run these special weapons. 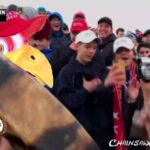