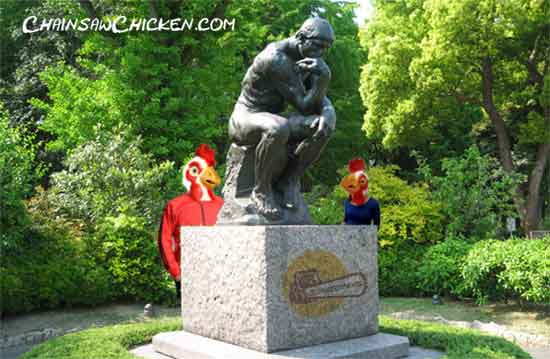 Chainsaw Chicken was visiting the city gardens with his niece, Rose Blossom Chicken. They came across a replica of ‘The Thinker’ statue prominently centered in the acreage.

Both of them stood and gazed at the statue, taking in the details sculpted in the figure. The discussion soon turned to the creative origin of this Rodin statue.

Rose Blossom started to speak, “I have read that The Thinker was originally entitled The Poet. He represented Dante, author of the Divine Comedy which had inspired The Gates, leaning forward to observe the circles of Hell, while meditating on his work. The Thinker was therefore initially both a being with a tortured body, almost a damned soul, and a free-thinking man, determined to transcend his suffering through poetry.”

She continued, “Still others have mentioned that ‘The Thinker’ typifies the German philosophy of ‘Geisteswissenschaft’. This is a set of human sciences such as philosophy, history, philology, musicology, linguistics, theater studies, literary studies, media studies, and sometimes even theology and jurisprudence”.

Rose moved the the other side of the statue and continued…

“But my art teacher says that this statue dynamically represents the anguish and guilt of being a white man. This is because of his colonization of the world, the robbing of land from indigenous people, white supremacy , toxic masculinity… and of course slavery.”

“Chainsaw began to laugh uncontrollably. He clutched his side from the heavy laughter. “Oh c’mon man!’ Chainsaw caught his breathe and went on. “This was obviously some comedic thing. Look at it! He’s sitting on some crude toilet, probably a rock or a stump with some way hollowed out. And he’s trying to concentrate while he tries to pinch a loaf. Then, he remembers he has nothing to clean himself with so he has to use his fingers. Notice his chin is resting on his wrists? That because he knows what’s on his fingers! After all, you said it was made for something called a Divine Comedy…  Ha ha ha ha ha!”

Rose Blossom rolled her eyes so hard even Chainsaw could hear it. 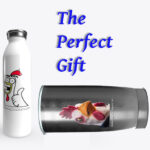 Here’s Mud in Your Eye!