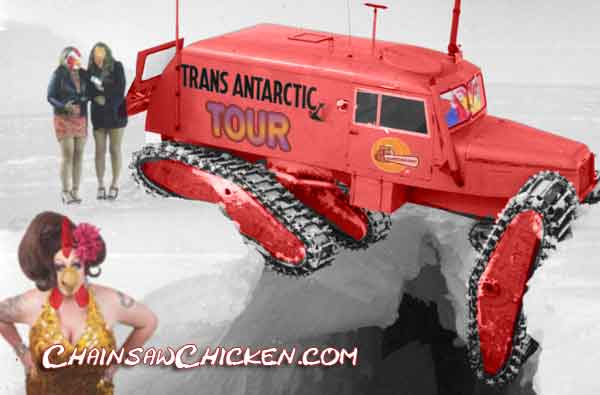 You may have seen this on the evening news but here is an update.  The ‘Trans Antarctic Tour’ has run into some difficulty on it trek to visit the many manned weather stations in the antarctic.

“It seems that our driver ran across an ice crevasse stranding the tracked snow vehicle in a precarious position” said the media spokes person for Chainsaw Chicken International, Ltd. “At first, we blamed it on operator error but now we’ve revised the explanation to the quintessential issue of our times, Global Warming”.

When asked how the tour was going before the incident, the three passengers who are members in the Austin Chapter of Drag Queen Story Time, seemed to have a lot to say.

Shangela Laquifa said, “We were having the best time with those Norwegian boys at the Troll Polar Institute. They have been there for months without even a glimpse of a woman in the flesh so we were really appreciated!”

Trinity blurted in to the conversation, “Them Norwegians were not nothin compared to those Russians at Novolazarevskaya Station! They didn’t even know the the Soviet Union ended! That’s a long time to be alone… if you know what I mean.

“But that Japanese station at Asuka.. “Oh my!” They both said together, “They are some strange guys. They had nothing to do with us. Just sat there smoking cigarettes and mumbling words in Japanese.”

“Back in the rig, girls! We are gonna try to jump the crack in the ice!” shout Buddy Chicken.”Let’s get this TRANS party going again! Off to Amundsen station at the South Pole.” 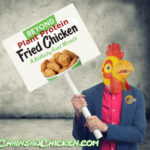 Get your FAKE chicken!